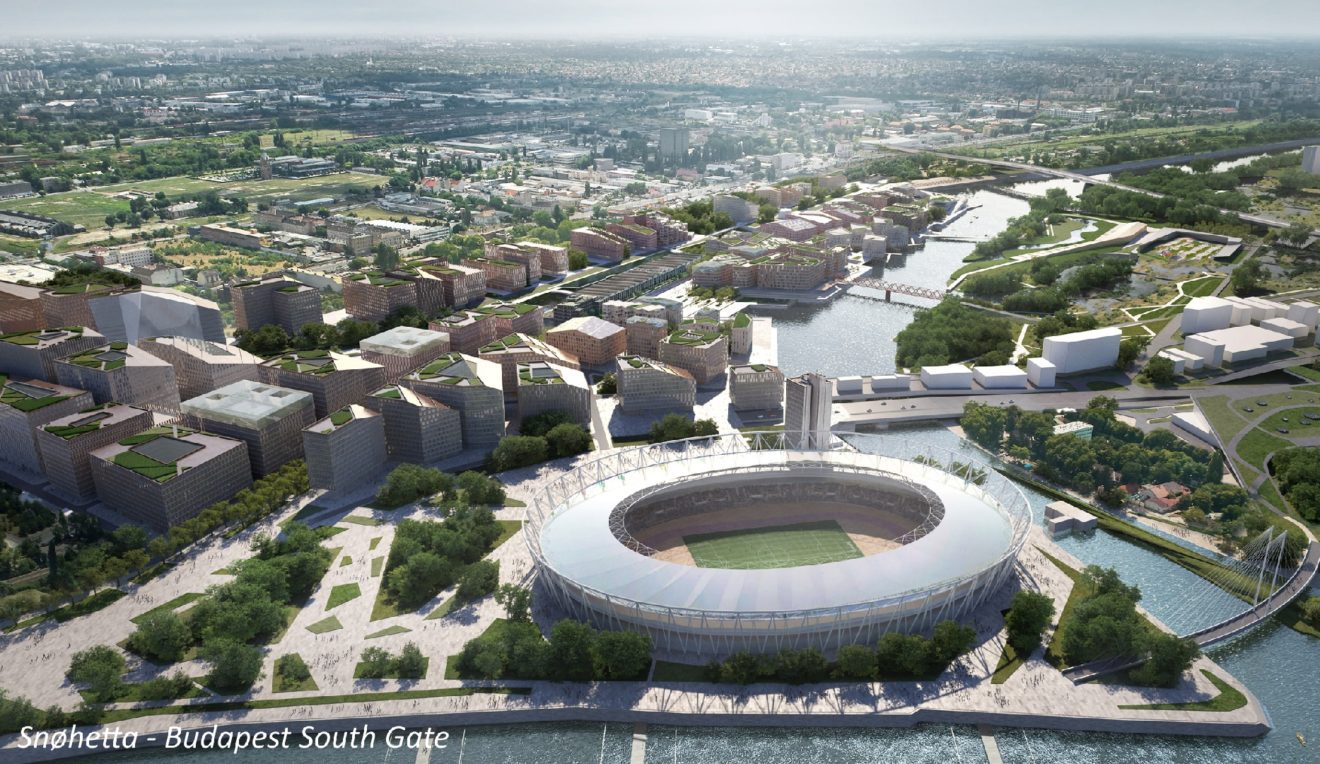 Rzeszów should take the example of Budapest

The citizens speak about the presidency of Tadeusz Ferenc very positively. On one issue, however, there are quite a few of negative comments. It’s about urban policy, which is quite poor in the city.

Bartosz Gubernat: The Vice-Minister of Justice, Marcin Warchoł, supported by Tadeusz Ferenec, wants to continue his current policy. His declaration was opposed to “Razem Dla Rzeszowa (Together for Rzeszow) agreement, and the SARP in its position draws attention to many years of mistakes and omissions in this matter. And also counts for changes.

Maciej Łobos: I look at this commitment with hope because I didn’t think I would live to see people who start noticing how important the environment in which they live and how much impact it has on our lives. A dozen years ago it seemed that nobody cares about it in Poland. I am only afraid of the “Kononowicz effect”, that is, “that there will be nothing“, because from criticism to constructive conclusions, the way is far. We all know it is wrong, but that doesn’t mean we know what to do to make it good. The mere introduction of local plans, without ensuring them, quality, not only change anything, but will lead to total investment paralysis in the city

GB: What Rzeszów needs to catch the breath regarding architecture and spatial planning?

MŁ: As always, we need to start by defining what is our goal, and then find ways to achieve it, analyze the risks along the way, etc. It seems to me that the basic thing is what -for my own needs- I call “patching the city”. We have a lot of land resources in the center of Rzeszów, which should be revitalized and intended for development. This would reduce uncontrolled extending of suburbs, reduce car traffic jams, reduce construction and maintenance costs. Unfortunately, this cannot be done as it Has been done until now, because as the last 30 years have shown, it is a way to nowhere. The common practice in the world is that first there are the competitions for the concept-masterplan covering a larger part of the city, and then on the basis of the winning work of a multidisciplinary team composed of conceptors, urban planners and specialists from many different fields jointly develops a local plan. This happens not only in western Europe, but in Hungary, for example. The patterns are ready, you just need to reach for them. To discuss about the space in the city, there must be some basis, therefore – CONPETITIONS, COMPETITIONS AND AGAIN COMPETITIONS!

GB: By the way about the competitions – in the media there was information that there were some discussions between Rzeszów branch of the Association of Polish Architects, and the authorities, on the organization of a competition for the development of the Wisłok valley. It’s about areas from the dam to Lisia Góra. Is this the right initiative?

MŁ: I do not know the details, but better late than never. It must be remembered, however, that something positive will come out of it only on condition that it is not going to be another study project put in a drawer, but a basis for discussion and development of a reliable local plan. As a model of what should be created, I can give the Hungarian “Budapest South Gate” plan. We analyzed it last year on the occasion of the competition and it is a fantastic model for Rzeszów on how to plan the development of space in the perspective of many years

GB: What is so unusual about this plan?

MŁ: There is nothing unusual – this is the standard conduct for normal people. Extraordinary is that we in Poland have been stubbornly ignoring these standards for years. Hungarians started by announcing an international competition in 2018 to develop a revitalization concept for one of Budapest’s southern districts. The competition was won by the well-known Norwegian architectural office Snøhetta. Based on their concept, a very detailed local plan was created. The plan basically regulates all aspects of spatial policy, shaping buildings, public land, streets, communications, infrastructure, etc. There are even guidelines for building facades. These are several volumes containing very detailed descriptions and drawings. By the way, the plan is extremely flexible and gives architects a lot of freedom. I have analysed similar plans prepared for Copenhagen at the time, and it is similar there. It really can be done, just a little good will.

GB: And if the city announced a competition for the project for the development of the Wisłok Valley, will you take part in it?

MŁ: As a rule, we do not participate in public tenders, and in competitions very rarely. The Polish Public Procurement Act is a pathological creation that rewards trash on an ad hoc basis – just cheap, which in the long term always results in serious losses. At the moment we have so much work that we are unlikely to be willing to take part in a competition in which the organizer does not cover at least the cost of participation. Maybe this time it would be better if we participated in the organization of such a competition, as experts working for the city? Various options are possible.

GB: Rzeszów is now a city of cranes, what you are currently working on?

MŁ: I have counted recently and it occurs that we are having almost 40 different active projects. The overwhelming majority are housing projects, but there are several office buildings and hotels. We can’t talk about most of them publicly yet, but as always, we’ll be showing them as soon as our customers acknowledge that we can. The fact that we are working on a complex next to Resovia stadium everyone has already heard, so from this we do not make a secret and soon we will show the project. Our first apartment building designed for Hegra company will also be on the market very soon. For the opening a unique hotel in Cracow where we designed interiors is waiting, but due to pandemic the owner stopped the opening. We start projects in Cracow and Warsaw, and we are also working on several larger urban assumptions, which we are particularly pleased with.

MŁ: Because good urban planning is the basis of a well-functioning city. In a well-designed urban tissue even a lousy building will find its place. Never the other way around.

GB: And how do you assess the overall condition of the economy at the beginning of 2021?

MŁ: For now, from our perspective, the situation looks very good, although we are anxiously observing what is happening in the world, because it will eventually affect all of us as well. The pandemic became a catalyst that caused rapid acceleration of processes, usually lasting years. The US is losing its position as a global hegemony and China is growing. Poland lost its chances of taking advantage of this situation around 2016 and we will have to pay for it once again. 5 – 6 years ago, the Chinese were looking for an ally in Europe, and Poland, due to its geographical location, was in a great position. Unfortunately, our authorities, which were fixated only on the alliance with the US, were not interested in this proposition.

Polish government apparently believed in the Fukujaman end of history and fraternity between the countries of the European Union. This is a topic for a longer argument, nonetheless the result being that small Hungary has become the spokesperson of Chinese interests in Europe, and now it will be de facto Germany. Recently, former Chancellor Gerhard Shroeder publicly said that Russia had the right to decide matters regarding its close neighbours, namely Ukraine and Belarus. That means, that Germany to control its own buffer zones, that is… Poland. This is how the great myth of pan-European fraternity dies.

GB: How this will affect the situation in Poland?

MŁ: It is difficult to say, but in the long run we should not expect anything good. Perhaps in a few years we will wake up in a completely different reality, as in 1918, when the world of kings and emperors disappeared in front of the eyes of the people of this time, and “democracy” and totalitarianism appeared. Those who were shaking the whole world disappeared, and new ones appeared in their place. It is very likely that we are entering a very similar period, which could end up with complete remodeling the world as we know. The difference is that at that time Poles, despite the absence of their own state, were somehow prepared for this historical window of opportunity. We had well-educated elites who understood the need to have their own state, and Polish culture and national identity were exceptionally strong.  Today, most people think only about warm water in the tap.

GB: Does what you are talking about translate into the work of architects and the developers and construction sectors? Apparently this sectors of life are guite distant.

MŁ: “Printing” of empty money, and consequently rising inflation, cause people to look for ways to escape from the cash losing value. This drives the real estate market and the construction industry, despite obvious crisis, is doing well for now and property prices are not falling. Unfortunately, in the long term this always leads to market crash and its breakdown.

GB: How all of this can affect Rzeszów?

MŁ: Rzeszów has a unique location – it is located at the intersection of the main north-south and east-west transport routes. We also have a very good airport. If Via Carpatia is built, and hopefully also the routes along the Carpathians, through Ukraine and Moldova, to Romania, we will become one of the main transit hubs in Europe. Such cities grow in an organic way, as long as they are not disturbed. There is a lot of unknown elements and speculations, but we have really good prospects. The only problem is that we have to at least try to use them.