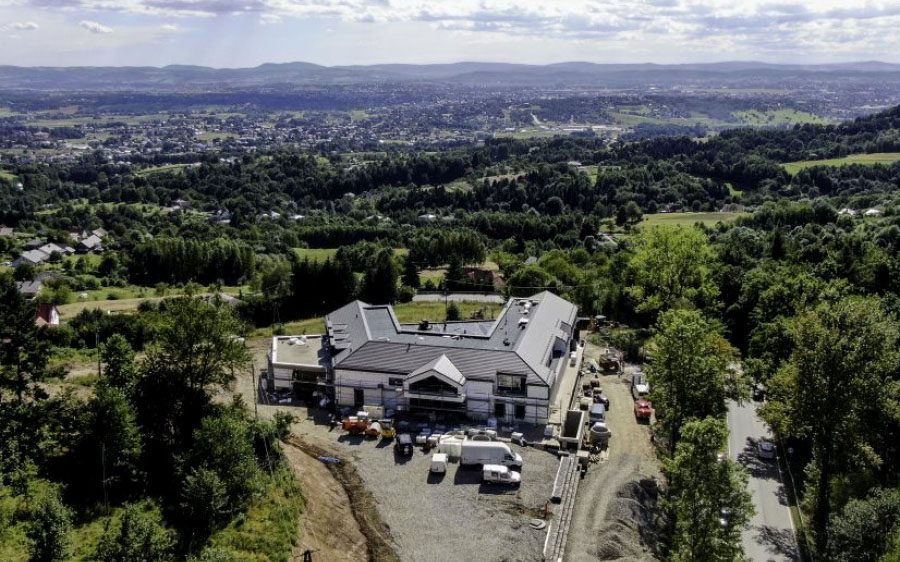 In Korczyna, right next to the road connecting Krosno with Rzeszów, the “Szklane Lniane” Conference and Banquet Center is being established. The impressive building is being built on the site of the former “U Cześnika” Inn. The author of the design is MWM Architekci from Rzeszów.

Construction began at the beginning of 2019 with the demolition of the former facility. On its place, a Conference and Banquet Center is being built, which with its name “Szklane Lniane” is to refer to the heritage and potential of the Krosno region, i.e. the glass-making traditions and the tradition of growing flax and linen production. On the other hand, glass has been used both in the architectural design and in interior design.

Textile elements made of linen will be visible throughout the building – these will include tablecloths, runners, curtains and staff shirts. The menu with elements of linen will be served on a specially designed glass tableware with an “embedded” structure of linen. One of the rooms, called “Lniane Historie”(Linen Stories), will be used to display items related to weaving.

Szklane Lniane is not only the name of the object, but it will also be called the so-called network product. Both glass and linen will also be available in restaurants of establishments associated under the Szklane Lniane brand. The linen menu, containing linseed, oil or flax sprouts, will be composed by the chef. Glass and linen will be strongly emphasized in such facilities as Hotel Nafta Krosno, Restaurant Naftaya, Restaurant and Hotel Klimat in Iwonicz-Zdrój, the iconic Krakowiak in Iwonicz-Zdrój and Zielony Domek, which is located in Rymanow’s  Health Resort Park (…)