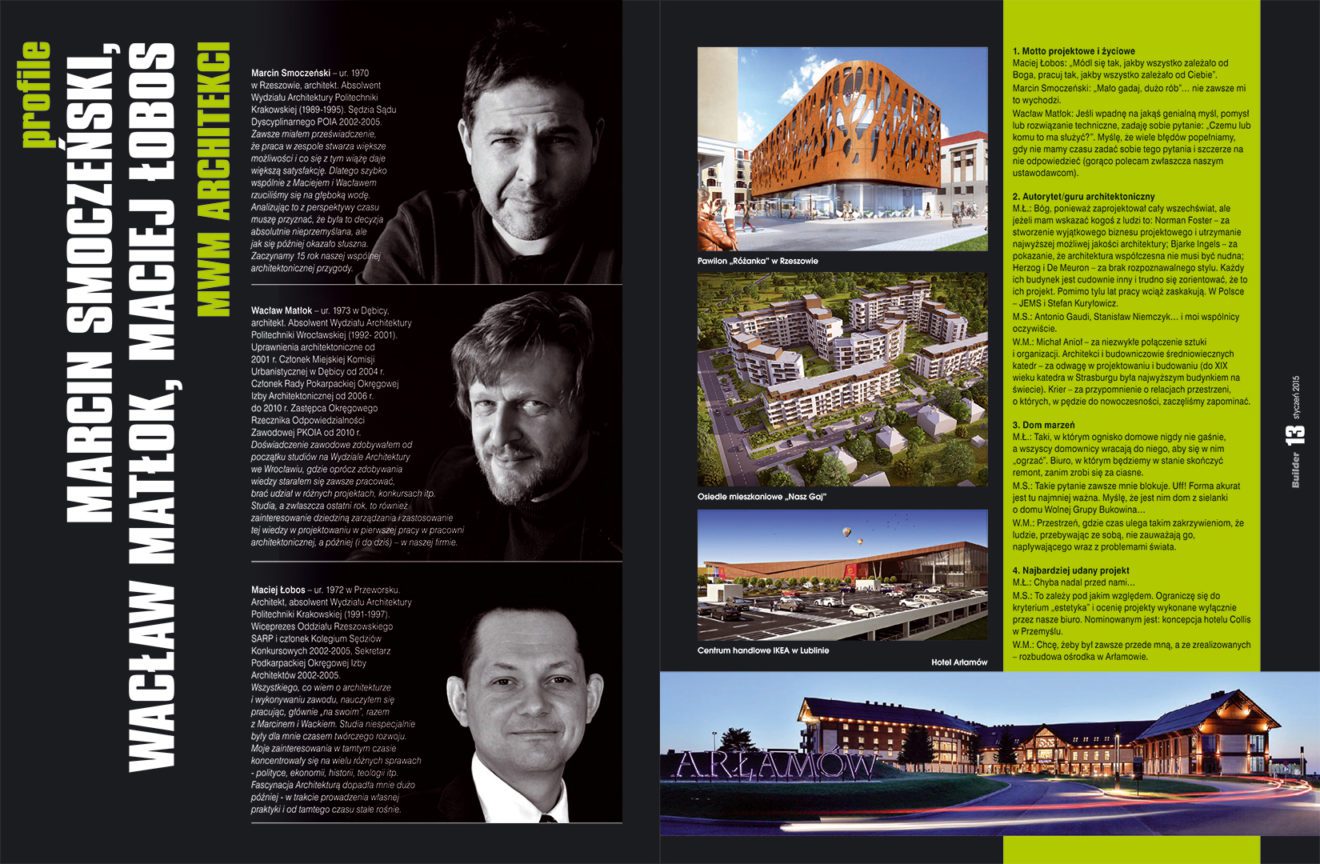 Marcin Smoczeński- born 1970 in Rzeszow. Graduate of the Faculty of Architecture at the Cracow University of Technology (1989-1995). Judge of the POIA Disciplinary Court in the years 2002-2005.

I have always been convinced that working in a team creates greater opportunities and, therefore, gives greater satisfaction. That is why, together with Maciej and Wacław, we threw ourselves into the deep end. Analyzing it in retrospect, I must admit that it was an absolutely ill-considered decision, but later it turned out to be right. We are starting the 15th year of our cooperative architectural adventure.

Wacław Matłok- born 1973 in Dębica. Architect, Graduate of the Faculty of Architecture at the Wroclaw University of Science and Technology (1992-2001). Architect’s License from 2001. Member of City of Dębica Planning Commission from 2004. Member of Subcarpathian Council of National Chamber of Polish Architects in the years 2006- 2010. Deputy Regional Screener for Professional Liability of the PKOIA from 2010.

I have been acquiring professional experience from the beginning of my studies at the Faculty of Architecture in Wroclaw, where in addition to gathering knowledge, I was always trying to work, participate in various projects, competitions and so on. Period of study and especially the last year it is also the interest in the field of management and the use of this knowledge in the first designing job in the studio as well as later (until today) in our company.

Maciej Łobos– born 1972 in Przeworsk. Architect, Graduate of the Faculty of Architecture at the Cracow University of Technology (1991-1997). Vice-President of The Rzeszow Branch of Association of Polish Architects (SARP) and Member of Jury Board (2002-2005). Secretary of Subcarpathian Council of National Chamber of Polish Architects in the years 2002-2005.

I learned everything I know about architecture and my profession mainly by working together with Marcin and Wacek for ourselves. Studies have not necessarily been a time of creative development for me. My interests at that time focused on many different things – politics, economics, history, theology, etc. The fascination with architecture caught up with me much later – during my own work placement and has been growing ever since.

Wacław Matłok: If I come up with a brilliant thought, idea, or solution, I ask myself, “What purpose does it serve?’’. I think that we make many mistakes when we don’t have time to ask ourselves this question and to answer it honestly (I highly recommend it for our legislators especially).

MŁ:  God, because he designed the entire universe. But if I have to name any of the people then: Norman Foster- for creating an exceptional design business and maintaining the highest possible quality of architecture; Bjarke Ingels – for showing that contemporary architecture does not have to be boring; Herzog and De Meuron – for the lack of a recognizable style. Each of their buildings is wonderfully different, and it’s hard to figure out if it’s their design or not. Despite so many years of work, they still surprise. In Poland- JEMS and Stefan Kuryłowicz.

MS: Antonio Gaudi, Stanisław Niemczyk… and my partners, of course.

WM: Michelangelo – for an unusual combination of art and organization. Architects and builders of medieval cathedrals – for their courage in designing and building (until the 19th century, the Strasbourg Cathedral was the tallest building in the world). Krier – for reminding us about the relations between spaces that we have begun to forget in our rush to modernity.

MŁ: The one in which the open hearth never fades, and all household members return to it to “warm up”. And an office where we will be able to finish renovation before it gets too cramped.

MS: Such a question always blocks me. Phew! The form is the least important here. I think it is a house from an ‘’ Idyll About the House’’ by Wolna Grupa Bukowina.

WM: A space where time is curved, so that people do not notice it flowing with the world’s problems while being together.

The most successful project

MŁ: Probably still ahead of us …

MS: It depends in what sense. I will limit myself to the criteria of “aesthetics” and evaluate projects made only by our office. The concept of the Collis Hotel in Przemyśl is nominated.

WM: I want it to be always ahead of me , but from the completed ones – extension of the Arłamów Resort.

MŁ: All of them! And that’s wonderful about them. They are exhausting, but the satisfaction in the end is priceless.

MS: Well, that is how our profession looks. If the project is well-organized, you can manage it and find plenty of time for other activities.

WM: Fortunately, we do not have too many of them, but if so, then they are mostly for extremely undecided investors.

MŁ: Conferences of the motivational speaker Fabian Błaszkiewicz, as well as our internal discussions, disagreements and a lot of jokes. It is also inspiring to observe the employees who started their professional career with us a few years ago. They develop, create ever larger and more difficult projects and help us manage the company.

MS: They are everywhere, you just need to choose one of them and follow it.

WM: If I say they are around us, it will sound trite. More concretely, I am most inspired by the achievements of science, technology and broadly understood knowledge about man (after all, it is his abilities that create and influence the perception of what we do).

Favorite solution (material, technology) that I use often

MŁ: I don’t really have such customs.

WM: I try not to be limited to any material preferences, but rather to refer to the place and to obtain a specific character from what is local.

The architect’s advantage and disadvantage that is the most conspicuous

MŁ: Disadvantages – failure to meet deadlines, difficulties with keeping the project budget, problems with work organization. Self-conceit and the conviction that you know everything better. Advantages – a qualified dilettante – the only person who, like a film director, is able to combine the efforts of many people with different professions and specialties into one coherent and well-thought-out whole.

WM: Advantage – interdisciplinary knowledge and openness to cooperation, but also persistence in implementing the vision to which you are fully convinced. Disadvantage- the belief that you have the authority to be infallible.

MS: I’m ashamed to admit it, but I don’t think I ever get an award. I am waiting patiently …

WM: In the field of architecture – for the 1st place (together with my partners) in the competition for the expansion of the Rzeszow University of Technology in 2000. It gave our company a pretty good start.

The worst building / structure (in my city, in Poland, in Europe, in the world)

MŁ: Joseph Stalin Palace of Culture and Science in Warsaw. Firstly, it’s rubbish. Secondly, it is a symbol of the Soviet occupation. Thirdly – the fact that it still stands is a shame for every Pole.

MS: I don’t like answering such questions, everyone has a dreck on their conscience, so I omit them on purpose.

WM: These are very sensitive issues. I think that every single case teaches something. Better to learn from other people’s mistakes (if any of them occur). 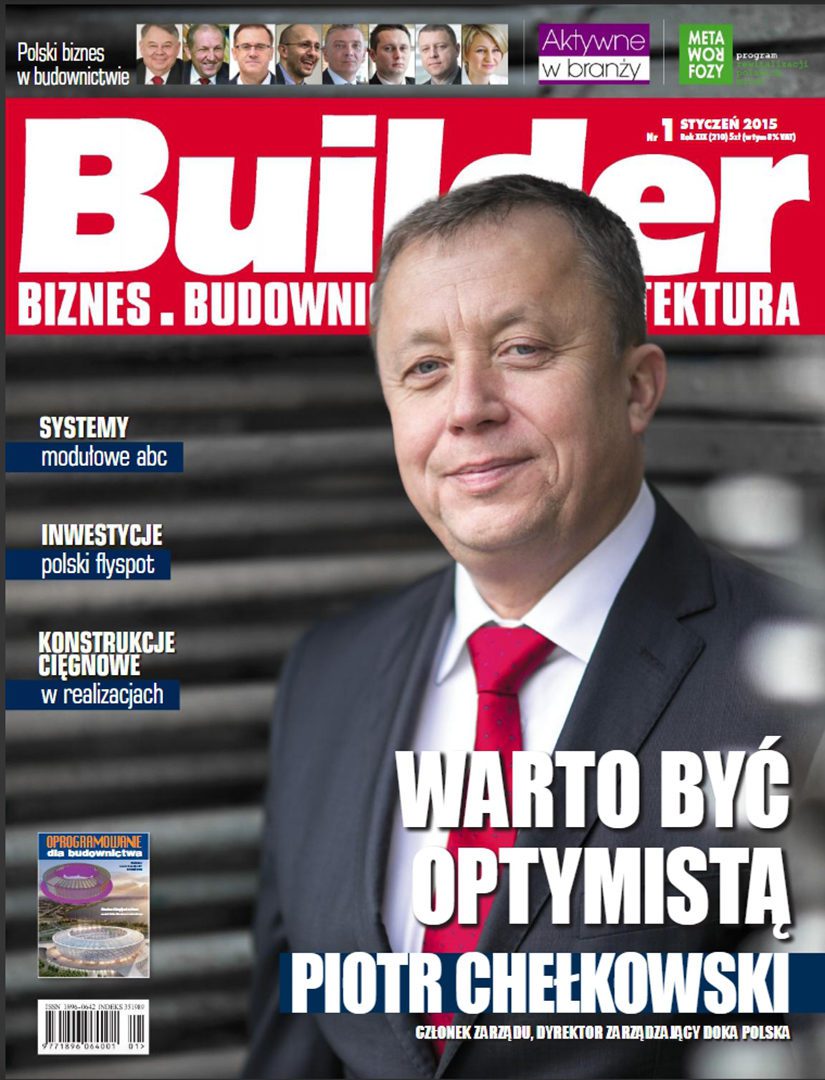