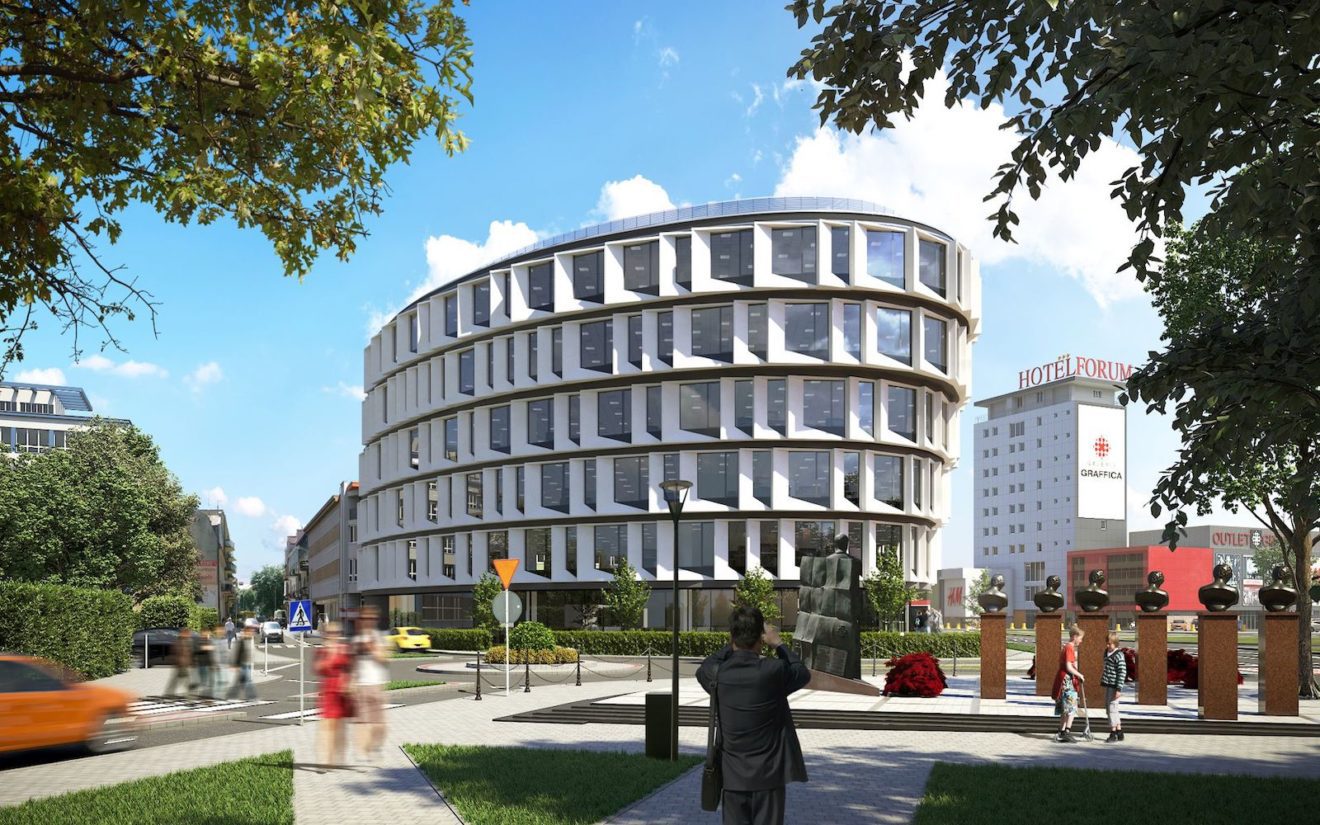 The second city will fit in infill buildings

In the center of Rzeszów there is enough space to build  basically a second city, even for 200 thousand people. Only need to start acting, prepare particular ideas for development of holes, chuckholes in the buildings and transformation of unattractive areas – believe Maciej Łobos and Marcin Smoczeński, Rzeszów architects, owners of the MWM Architects studio from Rzeszów.

At the corner of three streets in the center of Rzeszów: Cieplińskiego street, Zygmuntowska street and Moniuszki street there is a small building. Not conspicuous. For years it has served as the headquarters of banks. In front of it there is a small parking lot. In the neighborhood there is a bus stop, a short distance from it there is a market square, a souvenir of early Polish capitalism, usually called “Balcerowicz’s square”. These kind of areas are numerous in the center of Rzeszów, built up chaotically, undistinguished. It turns out, however, that we can try, at least in part, to change their character, to sort them out. On the plot on which the current building is located and the one occupied by the parking lot is planned to build an impressive office building, which has a chance to become one of the symbols of modern Rzeszów. – This is an extremely valuable area. One of the most important locations in Rzeszów, therefore it has required from us a special approach. We have been working on this project many months. The form of the building is not the result of our joyful creativity, but of many discussions and analyses – emphasize Maciej Łobos and Marcin Smoczeński, owners of MWM Architects studio from Rzeszów. It is this studio that prepares the project – one of the most interesting investments in the city center. The office facility is to have six above-ground floors and two underground floors, where parking spaces will be located. – The ground floor will be deeply withdrawn so that in front of the building a foreground, public space will be created. The top of the building will be front-ended to create an overhang above the street- explain architects. – As in many Polish cities also in Rzeszów are holes, chuckholes and the development has to be complemented. This building will be an extension of the frontage and on the side of Zygmuntowska street and from Cieplińskiego street – says Łobos. “It is intended to restore the urban fabric its human dimension by organizing and supplementing the development and creating valuable public spaces. According to the classic rules of urban planning, the project restores the traditional continuity of the frontage of urban streets, complements torn urban fabric and closes the corner of the building to create a dominant” – we read at the studio’s website.

How to complement the inner-city development of Rzeszów?

Such places, which require ordering, require new, thoughtful development in Rzeszów inner-city, are many. – In the very center of Rzeszów there is enough space to build basically a second city, even for 200 thousand people. Only need to start acting, prepare particular ideas for development of holes, chuckholes in the buildings and transformation of unattractive areas – believe Maciej Łobos and Marcin Smoczeński.

One of such places is so-called Balcerowicz’s square – a large area in the area of Moniuszki and Zygmuntowska streets, neighbouring with, among the others, Polish Post Office building and facilities belonging to the Farna parish. The square, set up with booths and tables, has needed investment for years. Another area in the immediate center is Wolności Square together with its adjacent plots. About possibilities for changes in that square began to speak a few years ago, when the idea of setting up a monument of Marshal Piłsudski appeared. First proposals, which came out of the circle of the initiators of the monument construction group, involved liquidate plants from the square, laying it with stone slabs, setting the marshal on Kasztanka horse and podium. This idea was opposed by residents, councilors and President Tadeusz Ferenc. In the end, the square had only a small cosmetic changes, necessary to make room for the monument. – The fact that we are dealing with various lessening in Poland, holes in the buildings development is on the one hand the effect of wars that got through Poland – buildings were demolished, nothing was created in their place, on the other hand it was the result of the post-war collapse of the urban plan, which began to occur since the 1960s, the collapse of planned urban space management. At the moment, new areas are attached to Rzeszów, which are being built. But in the very center of the city we have dozens of plots that demand thoughtful development – says Maciej Łobos.

Is the management plan for development the entire city centre is needed?

-Zoning plans are essential primarily for new areas that are included in the city. But our inner-city area is an area where, theoretically, plans do not have to be. Here we should use the legal instrument, which is the decision on the development conditions based on the principle of good neighbourliness (the new building should be a form and size similar to those in the vicinity – editor’s note). And on the basis of this legal basis supplement the development – says Marcin Smoczeński.  – The most important thing is that a sensible concept of the development of places such as the aforementioned Balcerowicz Square or the area of Wolności Square will finally be prepared. Various functions can be introduced there. Let trade continue to exist there, because it has been there for long time and people have used to it, or services, offices, housing, cultural institutions, greenery. For example – under the market, one or the other, we can make two floors of parking lots, above them a commercial space, above it apartments, above them additionally greenery – these are quick ideas, without analysis, but there are no things which cannot be done. Such concept should have been prepared years ago. Unfortunately, it is still not here. I think it needs to be done and show people to see what these areas can look like. Until it is not done and not publicly discussed, people will not be aware of how a part of the city can change, says Maciej Łobos, and he adds: it is often the case that we know the area, but we are not aware that it can be shaped differently. Sometimes, moreover, this lack of awareness also affects us architects – sometimes we do not pay attention to some area. The example is the plots at the corner of Zygmuntowska, Cieplińskiego and Moniuszki streets, where we designed the office building. I had known this land for a long time, I had been there many times, I had passed it and until investors came up with a proposal to design a building there, I had not thought it could be used differently than it is now. For this reason, ideas and concepts that can be presented to the public are so important – says Maciej Łobos. – We are, of course, aware of certain limitations, difficulties, among the others, property rights that concern certain areas. But in order to be able to manage them, such matters need to be regulated as soon as possible – adds Marcin Smoczeński.

Condensing development by inviting the cars to the city center?

Architects believe that in the broadly understood center of Rzeszów it is possible to develop areas where practically a new city can be built. One of such places is the area after former Zelmer company. It’s more than 10 hectares where you can create a new inner-city district. -With all its features. It’s a place with incredible potential. To begin with, however, we would have to think about what to keep from the existing development. After all, there are old buildings, some of which can be converted into lofts or offices. Remaining area can be complemented by a new, thoughtful development. Let’s also look at the area of Boy-Żeleński street – built-up with halls, warehouses. Such objects can be moved to another area, and this, very valuable, can be used in a new way, building a city there. There are many such places in Rzeszów – it is also, for example, area of Okulicki avenue, Siemieńskiego street, Króla Augusta street, Konopnicka street or areas currently belonging to the army – architects enumerate. Residents, skeptical of condensing inner-city buildings, can ask about communication. New buildings are new residents and new cars. – The areas we are talking about are within a few or several minutes of walk from the train station. If they are skillfully developed, complemented by all the functions necessary for people’s lives – schools, kindergartens, trade, then people will really need less cars, because everything, or almost everything will be in place. Communication problems are caused more by the fact that the city is extending, large settlements are created on the outskirts of the city, where each of the residents needs a car to get to work, take the children to school, etc. The construction of housing estates away from the center causes big problems for the city – the need to build new road infrastructure, educational facilities, expensive utilities. And in the city center we have full utilities, connected and really cheap to invest. It is only necessary to start taking concrete actions – to create concepts, to organize public discussions and to implement all this in form of concrete projects. Only complaining that it is wrong, even if it is legitimate, will not change anything.